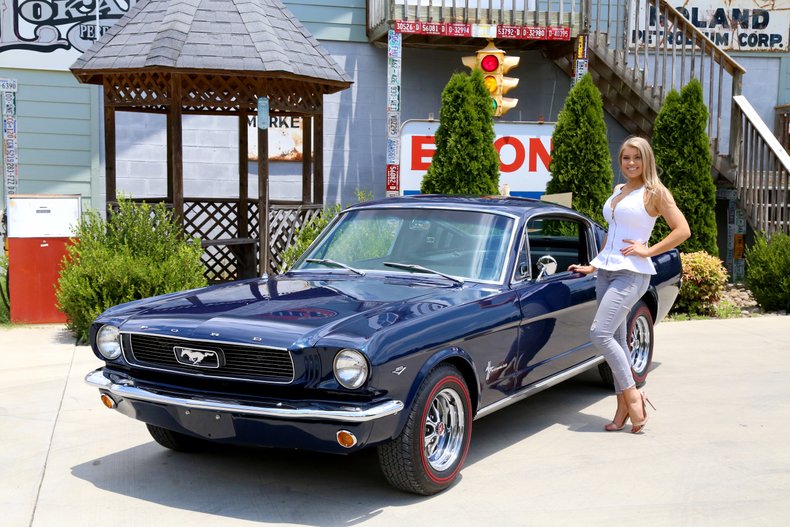 Up for sale we have a 1966 Ford Mustang Fastback. This is easily one of the most iconic body styles Ford ever built and the one we have for you has a killer look. It was an original California car that has been restored back to the factory color combo. The body is straight down the sides and all the door, hood, and trunk gaps are great. Also, the fit of the all the panels to the door and hood are excellent. Everything is covered in the Nightmist Blue paint that is the factory color and it has been buffed and polished to a mirror finish that's slick as a ribbon. As you look over the chrome you will notice the bumpers were replaced, and that the taillights, vent windows, and emblems are like new. All the stainless is in great condition from the window trim to the rocker trim. You'll notice the front windshield appears replaced with a new seal installed. The rest of the glass is in great condition and new door weather-stripping has been installed. To finish off the look it's sitting on a set of Magnum wheels with new Red Line Tires.

On the inside, it's also done in the factory combination of Black with Bucket seats. As you open the door you'll see the door panels have been replaced and are in like new condition. Also, the seat covers are new and all the padding is great. The carpet is done in black and has been replaced along with the seal plates. Looking at the headliner it's also been replaced and it has a great fit. All the interior lights are working along with the emergency brake and horn. As you look at the dash you'll see it has the 140 Speedo that's working. Also, all the other gauges are working along with the signals and lights. This being a 2+2 it has the fold down rear seat, and it also has seat belts front and back. Inside the trunk you'll see new weather stripping and it has a trunk mat, floors mats, and a spare.

Under the hood it's powered by what we believe is the original 289 V8. This car was born on June 17 1966 and the engine casting date has it built at the end of May and the Engine tag has it as June Engine. This is a C code car so it's setup with the Ford Intake and the Two Barrel Carb. Also, you'll see it has the smog pump as it was an original California car. The 289 is mated to the Top Loader Four Speed and 8” Rear end with a 2.80 Gear. This Mustang has Power Steering with Disc Brakes on the Front. For exhaust it has Manifolds with dual pipes and Xlerator Mufflers. When you look under this '66 the frame and floors all appear to be solid and detailed in black.


The first noticeable cosmetic changes to the Mustang came with the 1966 model. From the front, we saw a new grille featuring chrome edges and horizontal inserts, rather than the original honeycomb pattern. The horizontal and vertical bars around the running horse logo were also removed, and the quarter panel Mustang emblems were changed to feature the tri-bar logo behind the horse. Some of these changes, including the addition of a five-gauge instrument cluster added to the interior, served to further differentiate the Mustang from the Falcon. The '66 Mustang was also quite customizable, available in 34 varieties of colors and styles, including interior options. The Mustang would be the best-selling convertible in 1966, with 72,119 sold, beating the number two Impala by almost 2:1. The 1966 model year saw introduction of 'High Country Special' limited edition, 333 of them were sold in Colorado, Wyoming, and Nebraska. 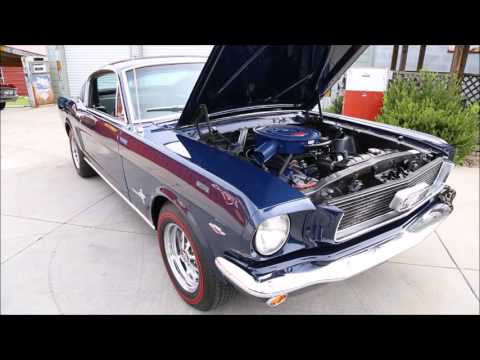