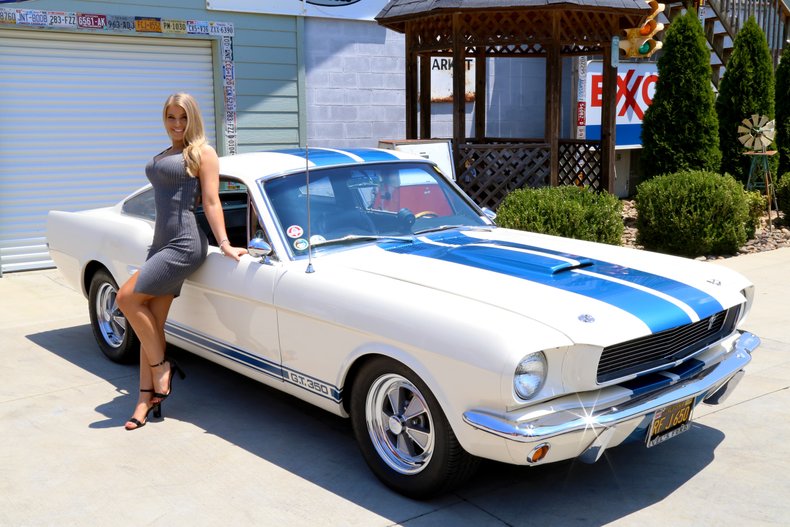 Up for sale we have a 1965 Ford Mustang Shelby 350 Carryover Clone. The carryover Shelbys were built in late '65 due to a strike at Ford. They offered options from both 1965 and 1966. The one we have for you is a clone that had a complete resto that was done in 2015. It retains the factory sheet metal and when it was built the side scoops with vent tubes were installed. Also, the fiberglass hood with the hood scoop was installed. The roof vents were also replaced with port windows that are plexiglass as they would have been originally. Down the sides of this '65 are straight as an arrow and the doors have an excellent fit with all the gaps being great. The body is covered in the Wimbledon White that's accented by the Guardsman Blue Top Stripes and blue side stripes. This Mustang has been buffed and polished to a deep rich shine that's slick as ribbon. Both the bumpers, tail light bezels, gas cap, front grill and even the turn signal bezels are all like new. All the glass looks excellent and the stainless around it is also in great condition. To finish off the exterior it's sitting on the 15x6 Cragars that were built for Shelby Cars and they have Cooper Cobra Tires.
On the inside, it's also done in the classic black which is how the Shelbys came. Everything is like new from the seats, which have been recovered and had the padding redone, to the Headliner that has an excellent fit. The Door panels have also been replaced and are in great condition. Also, the carpet was replaced along with the seal plates. Looking at the dash it's got the GT Gauge cluster that's all working from the 140 MPH Speedo to the Dash Mounted Tach. This Mustang has the stock style shifter that was built to work with the Five Speed Trans. A set of 2-point lap belts were added along with a Shelby Wood Wheel and an aftermarket Tilt Column.

Under the hood it's equally impressive, featuring a 289 that has been upgraded with a set of 351 Heads and an aftermarket set of TRW Aluminum Rockers. The intake is a reproduction Aluminum that looks like a Shelby and is set up with a 570 Holley Carb. It's dressed with a chrome breather and it also has Tall Cobra Valve Covers. The Trans has been upgraded to Tremec Five Speed from Modern Drivelines and has a Hydraulic Clutch. It's mated to the 9” Rear End, and for exhaust it has custom Headers with 2 ¼” Exhaust and FlowMaster Mufflers. Under the front of this 'Stang it has Tubular Control Arms Top and Bottom from Chassic Works along with Coil Over Shocks and a Large Sway Bar. It also has Power Rack and Pinon Steering from Total Control Products. For brakes it has Disc up front and Drum on the rear. Out back Traction bars were added and it has a set of KONI Shocks. The frame and floors all appear rock solid, and don't appear to have been patched.

This is one of the best driving Mustangs we've ever owned. We have multiple pictures and a large folder with documents and information from the restoration. If we can help you in any way with questions or a specific picture, you can call our office at (865)988-8088. Or feel free to call Devvin at (865) 256 2366, or you can e-mail us at sales@smtclassics.com.

A Brief History of the 1965 Mustang


In 1965, the Mustang met Shelby American, a car customizing company. This match made in heaven introduced the Shelby Mustang, which was the higher power version of the standard Mustang. Ford approached racing legend Carroll Shelby to design a unique racing variant of the Mustang. On January 27th of 1965, the first Shelby Mustang was created: a Wimbledon White Shelby GT350. In that year, a total of 562 GT350's were created, along with a race version: the Shelby GT350R.

One of the 1965 Mustangs for sale was the first Mustang GT (Grand Touring) option. With the GT, you could choose one of two optional V8 engines, with either 225 or 271 hp, along with a pick of a three- or four-speed manual, or Cruise-O-Matic transmission. With this upgrade, you also got a special dashboard instrument cluster (which later became standard in '66), stripes on the lower body sides, fog lamps on the grille, and unique GT badges. 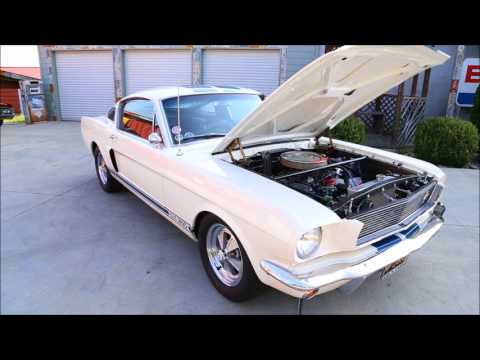