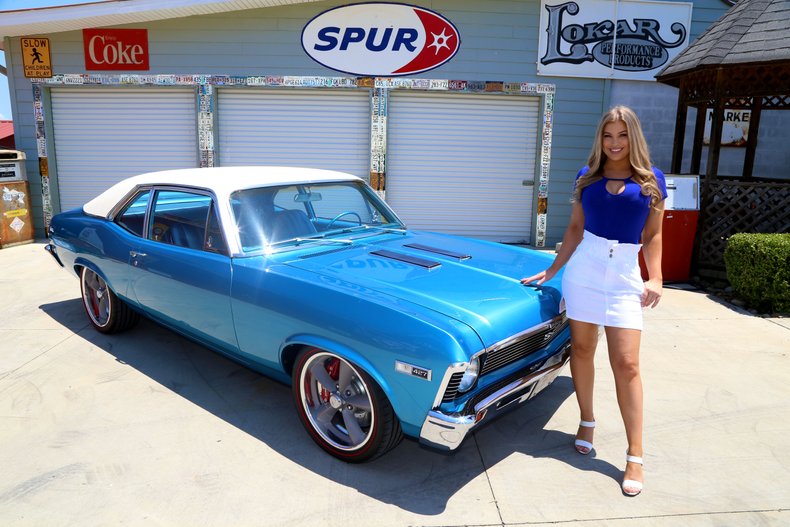 Up for sale we have a beautiful 1968 Chevy II Nova. The '68 Nova was completely redesigned and was the last year for the Chevy II designation. This Nova has had a meticulous restoration one on it. It took home Best of Nova and Show Class Winner at a GoodGuys event and that was before being upgraded to the Big Block package. This is a gorgeous representation of the Muscle Car Era that we are sure you're going to love. From first glance, there's no denying that the body is laser straight with great panel fit. A straight car can only be appreciated fully with a top of the line paint job, and this one won't disappoint. Everything is covered in the Grotto Blue paint that is slick as a ribbon with a mirror finish. Inside the jams, under the hood, and in the trunk are all equally impressive. This '68 has a Super Sport Hood and Grill that looks like new. The Grotto Blue Paint is accented by a new white vinyl top. At the time of the resto all the chrome was replaced along with the window stainless. Also, all the glass was removed and resealed, and the side glass felt and weather stripping was changed. To complete the look this Chevy II is sitting on a set of 18” and 20” Billet Specialty Wheels that show off the 6 Piston and 4 Piston Four Wheel Disc Brakes with Drilled and slotted rotors.
Next, we will look at the interior of the '68. On the inside, it's done in Blue which is the perfectly complement to the exterior color combination. When you open the door you'll see it has the front bucket seats with the short center console that houses the factory style gauges and Four Speed shifter. All the seat covers, and door panels are in excellent condition and were installed new. Also, the headliner and carpet look new and done in blue. Looking at the dash it all looks correct and even has the in-dash tach. The Dash pad is in excellent condition and it has been upgraded with Vintage Air AC and Heat. In the trunk, it's all rock solid and has a beautiful detail having the trunk mat with spare and jack.
Finally, we will look at the heartbeat of the Chevy. Under the hood the first thing you'll notice is the attention to detail. It's powered by a fresh Built 427 Big Block that's set up with Aluminum Heads and a Winters Intake with a Holley Carb. It's dressed in Custom valve covers along with a custom Air Cleaner. Along with having Air Condition it's also set up with Power Steering. For exhaust, it has Headers with 2 ½” Pipes and Flow Master Style Mufflers. The 427 is mated to the Muncie Four Speed trans that goes out back to the 12 Bolt Posi Rear End with around 3.55 gears. When you look under this Nova it looks phenomenal. The frame and floors look great with new bushings under the front subframe. Out back it has had new leaf spring bushings installed and you can see a new gas tank along with new fuel lines. Also, new brake lines were installed to feed the Four-Wheel Disc Brake Package that features 6 Piston and 4 Piston Calipers along with drilled and slotted rotors. You'll also notice new sway bars were installed both front and rear.
This is a gorgeous car that comes with no excuses. It's ready to cruise or show. If we can help you in any way with questions or a specific picture, you can call our office at (865)988-8088. Or feel free to call Devvin at (865) 256 2366, or you can e-mail us at sales@smtclassics.com.


The 60s and 70s were a time of competition and advancement in the realm of American compact cars. The classic Chevy Nova was a well-equipped competitor due to it's size, speed, and price tag. Originally called the Chevy II, the Nova gained it's new name in 1969. The Nova was produced from 1962-1988. Designed in 1961 and released in 1962, the Chevy II was a back-to-basics compact car, smaller than the full-size Chevy vehicles, but bigger than the compact Chevy Corvair.The first generation ran from 1962-1965. Nova was the top model in the Chevy II lineup through 1968. The Chevy II nameplate was dropped, Nova becoming the nameplate for the 1969 through 1979 models. The second generation of the Chevy Nova was a faster version equipped with a 327 cubic-inch eight cylinder engine featuring 350 horsepower, which shaved a few seconds off of the previous edition's quarter mile time record. 1968 saw a reincarnation of the Nova as the Nova SS - based mechanically and aesthetically on the Chevy Camaro. Chevy resurrected the Nova badge in the spring of 1984 and released the fifth generation of Novas between 1985-1988. Now, Chevy Novas fall into the collectible car category, on the more affordable end of the spectrum. 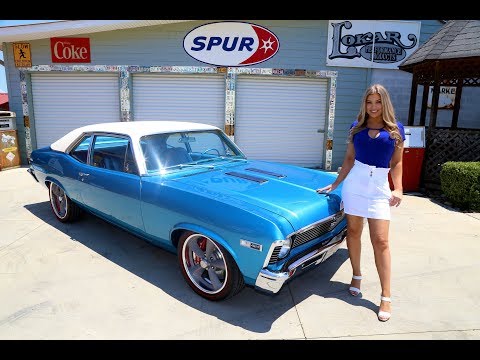