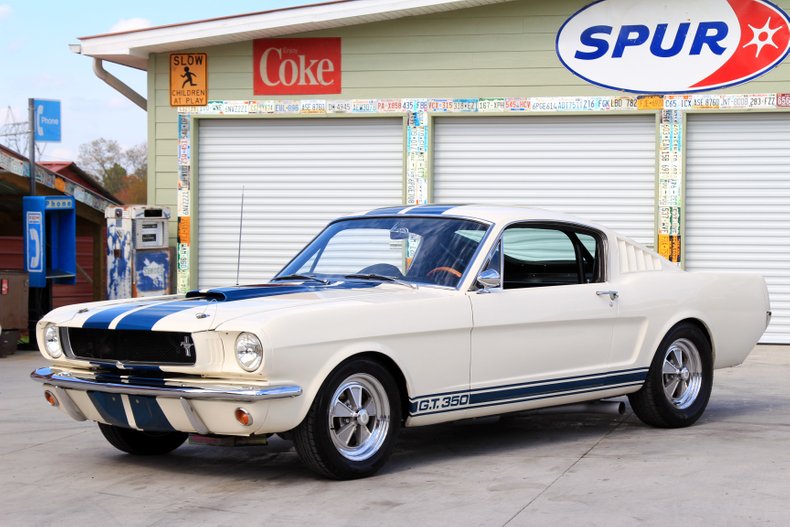 For sale we have a 1966 Ford Mustang Shelby GT350 clone.This stang was built by a Shelby builder and it has a lot of real Shelby parts. The dash mounted tach, roll bar, and Shelby wheels are just a few to name. This car has been owned by the same person for the last 15 years and is one of the best built Mustangs we have ever owned. The body is solid and very straight. It has the glass GT hood that's pinned down. The bumpers were changed at the time of the resto as well as most of the Chrome. The paint on this car is slick and is covered in the Wimbeldon White with the Blue Stripes that are up the hood, over the top, and down the trunk as well as the GT 350 side stripes. This car has slick paint that has a very good shine. It's sitting on a set of '65 Shelby Crager 5 Spoke Wheels. On the inside it's all done in black and done like a '65 Shelby with Bucket Seats. It has the 3” Shelby Seat belts with the roll bar. The back seat was removed for the Shelby package tray. When you look at the dash it has the Shelby pad that has the tach and oil gauge. The shifter looks stock even though it has a 5 Speed trans. Under the hood it's powered by a Keith Craft Racing 418 CI Engine. It has a set of Victor Jr Aluminum Heads, JE Piston Steel Stroker Crank, H Beam Rods, Com Solid Roller Cam, Billet Lower Girdle, 7 ½ Quart Trans Am Oli Pan. Also, it has a Holley Nascar Fuel Pump and a Victor JR Intake with a 950 Devince Carb and a 6AL ign from MSD. The Trans is a 600 Tremec 5 Speed with a McLeod Twin Disc Clutch and an Aluminum Fly Wheel. The rear end is a 9” Currier 389 Detroit Locker. It has Hooker Super Comp Headers and 3” Flow master Exhaust. This car is fast and a blast to drive. If we can help you in any way with questions or a specific picture, you can call our office at (865)988-8088. Or feel free to call Daniel at (423) 807 0600, Devvin at (865) 256 2366, or you can e-mail us at smokymountaintraders@yahoo.com.