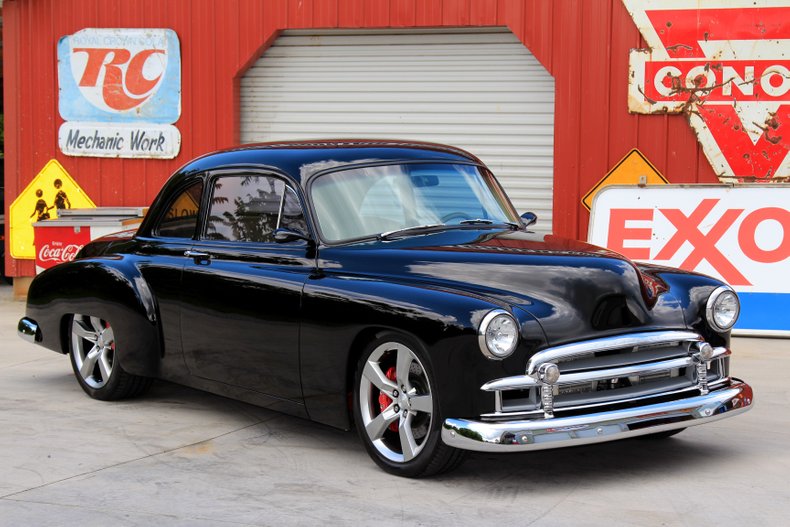 For our HOT AUG. sale we have a very special 1950 Chevy Styleline Deluxe for you.We cut it 2000 in the 2nd week. This car was built by Performance Vehicle Works in Cornelius N.C. We have the complete photo documentation of the car from front to finish. This is a Good Guys Winning Street Rodder Magazine car that screams quality in every way possible. It was pulled from the frame and took to bare metal. They replaced all the floor pans, trans tunnel, rocker panels, wheel tubs, and trunk pans. To fit the massive Wheels they raised the front wheel opening 3 ½” and reshaped the radius, and they did the same out back but only raised them 1 ¾” The hood was changed form a 2 piece to 1 and was widened by 1” They changed the windshield and used the glass from a '50 Oldsmobile. The bumper was also changed to a one piece. Everything is covered in PPG 9300 Black. Hours were spent buffing and polishing to give this '50 a deep rich shine over a laser straight body. All the glass was replaced as well as the seals and weather stripping. It's sitting on a set of 2010 Camaro Wheels with 20x8 up front and 20x9 out back. The interior is done by Pharrs Custom Interior. The front bucket are from a '06 GTO. They removed the head rest before covering them in Beige Capeone Leather. They also used the door panels from the GTO with them being cut and refitted using NuRelics Power Windows, the GTO Door handles, Power Door Locks and bear claw latches. The console is custom made and runs from the dash back. They added A/C vents not only to the dash but all in the back of the console for the rear passengers. The gauges in the dash were removed and sent to RedLine gauge works where they rebuilt them to work with the LS Engine. The steering column is an Ididit Tilt with the flaming river water fall steering wheel. The secret audio with a Pioneer based 10 Disc CD Changer along with speaks in the doors and rear package tray make up the custom sounds system. Under the hood it's clean and neat. The power comes from a LS3 V8. It's a 376 CI Built by Heintz Automotive in Statesville N.C. The engine has K1 H Beam rods, Wiseco LS Forged Pistons, Comp LSR Cam, and LS3 heads. The intake is a LS3 with LS1 Throttle Body and Aeromotive Billet Fuel Rails with Fast Injection. Also, it has a pair of 67mm TiAL/Garret T4 Turbos with twin 44mm Wastegates and Two 38 MM blow off valves. To keep it cool it has a dual core radiator from Be Cool with twin 11” Fans. The headers are custom PVW stainless headers that feeds the turbo with 3” Exhaust. The trans is a T56 Six Speed with a 8” Rear end that has 364 gears and Moser 31 Splined Axles. When they had this car Dyno'd they dialed back the boost to 10lb generating 600 HP and 560lb-ft of torque. The math shows that if dialed up to 22lb it would generate more than 1,000 HP The 9” Rear End is held in with a custom 4 link with QA1 Coil Overs. Up front it has control arms from a Z06 Corvette with Z06 Rotors and Calibers. Out back the brakes are also from a Z06. The power booster is a 90% under dash unit by Kugel Komponents. If we can help you in any way with questions or a specific picture, you can call our office at (865)988-8088. Or feel free to call Daniel at (423) 807 0600, Devvin at (865) 256 2366, or you can e-mail us at smokymountaintraders@yahoo.com.